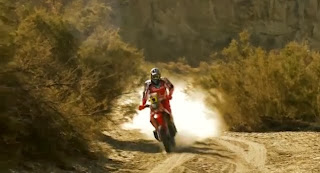 Helder Rodrigues has never won a Dakar Rally. However he is hoping that his luck will change. He is riding a newly designed motorcycle by Honda Racing Corp. (HRC), the Honda CRF 450. The 2013 Rally of Morocco was recently won on a Honda CRF 450 with all five of the HRC team members finishing in the top 10. Will the newly designed motorcycle carry an HRC rider to the podium?

Check out this video with Rodrigues talking about the 2014 Dakar Rally and his ride.
By Troy - January 03, 2014