How To Make A Motorcycle Fly 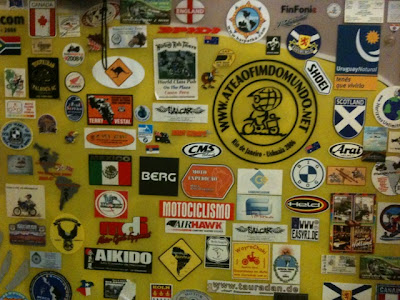 Have you ever seen this wall? If you have traveled in South America by motorcycle there is a good chance that you may have seen it. It's a wall inside a business called Dakar Motors.

Dakar Motors is a motorcycle garage, motorcycle hostel and motorcycle transport operation in Buenos Aires, Argentina. The owners Javier and Sandra open up their doors to motorcyclists from all over the world and make them feel welcome. I had contacted Dakar Motors the prior week about arranging transport of my motorcycle from Buenos Aires to Houston. I arrived at 9am on Monday morning and the process began... 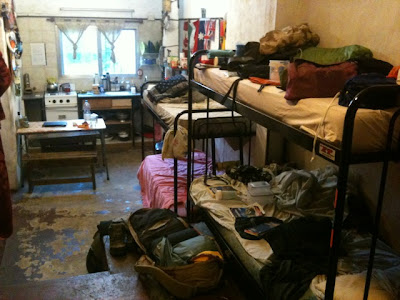 First, I checked into the hostel. Really it was just a room in the back of the garage. There were two bunk beds with room for four people. There was a small kitchen. And, there was a swap shelf... a shelf with unneeded items left by other travelers for other travelers. There was only one other traveler staying in the room. He was a Britt just beginning his travels in South America. Of course we had lots to talk about and got along nicely.

After settling into the hostel, Sandra and I went over the paperwork that would be required to transport my motorcycle.

Sandra had already briefed me by email about all the papers and copies of papers that I would need to have ready. I had all my papers in order, but there was one small detail about which I had a question.

When I crossed from Brazil to Argentina, the customs officer filled in my motorcycle title number in the place of my VIN chassis number. I asked Sandra if this would possibly cause a problem. She said... YES. 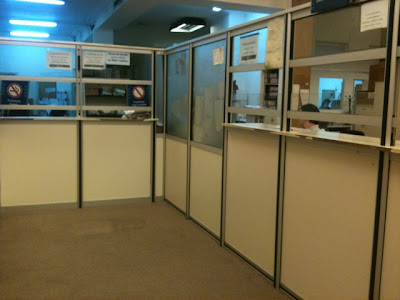 So I was directed to the central office of customs to correct the problem.

On Tuesday morning, I arrived to the customs office and waited in the invisible line. After some time passed, a clerk greeted me, took my papers, then said that she would be right back. I waited in the invisible line once again. After some time, the clerk said that her boss would be reviewing the request, but he would not be able to respond until after lunch. I left the office in search of some food.

I returned to the customs office in the afternoon to check on the progress of my documents. I waited for a while in the invisible line, then after some time I was told that the boss would like to see me.

I passed through to the other side and sat down in the office of the boss. We exchanged some pleasantries, then he apologized for the error that his staff had made when I entered Argentina. Wow... shocker. He was very nice and very accommodating. He placed a few phone calls, typed some notes into his computer keyboard, then printed a document.

The documented basically stated... To Whom It May Concern... and verified the correct VIN chassis number for my motorcycle. Not too bad. It only took about 6 hours in total. Honestly, I thought that it might take days. Good thing that the boss was on the job. 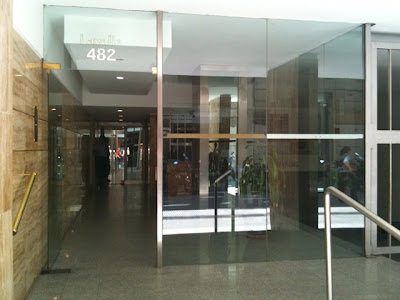 On Wednesday I went to this office building in the city center. 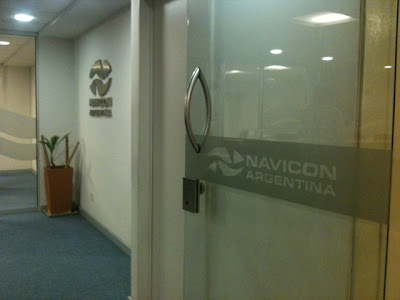 Inside the offices of Navicon, my documentation was processed for the shipment of my motorcycle. 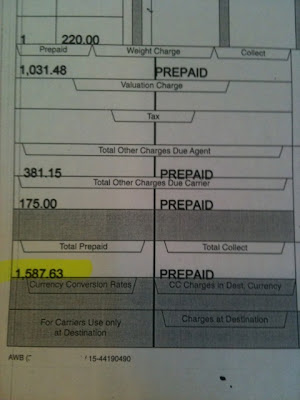 I then went to the bank next door to withdraw the equivalent of US$1,600 in Argentinian Pesos. It was a huge wad of money to be carrying around in city. Luckily, I only had to walk next door to the office of Navicon once again to make payment. 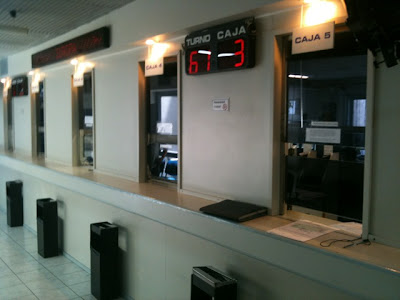 I presented my documents and my payment to this office. 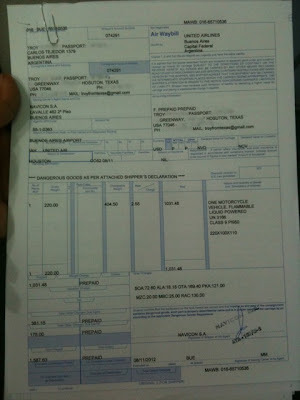 In return, I received a Shipment Way Bill which described how my cargo would be shipped from Buenos Aires to Houston. 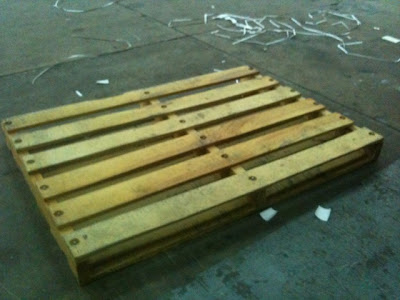 On Thursday, I rode my moto to the airport cargo terminal where I encountered this pallet. 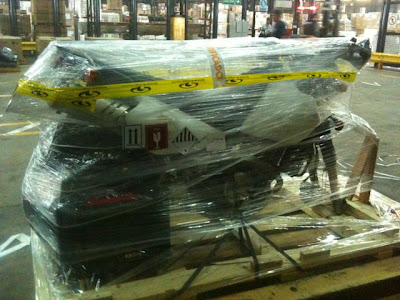 I removed my front wheel and my rear case to give my shipment a smaller profile. Some workers then strapped and wrapped my bike like mummy. 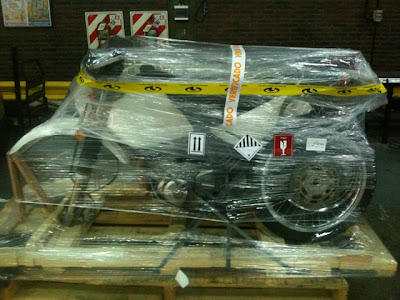 They placed a few stickers on the wrapping 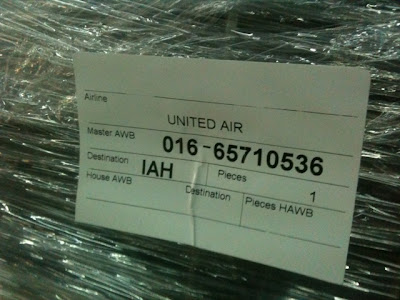 This sticker designated that United Airlines was transporting the pallet to IAH (Houston Intercontinental Airport). 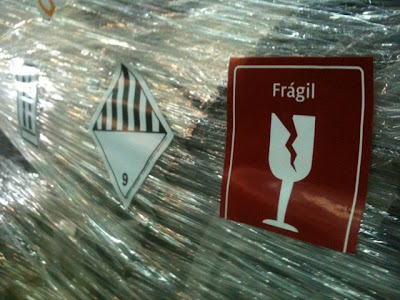 This sticker designated that my shipment was fragile.

Oh... if only they knew where I had ridden my motorcycle... they would have known that my motorcycle was not fragile. Emi might be important... but fragile... NO. 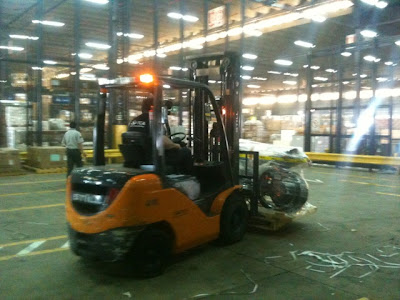 Anyways, they carried my motorcycle away and placed it into some waiting dock. 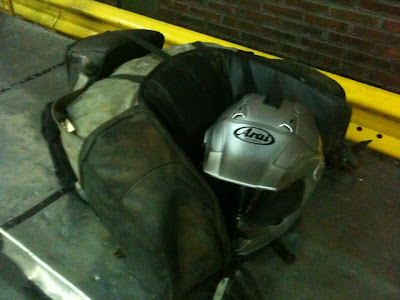 All that remained for me to carry was my saddle bag, my tank bag and my helmet. 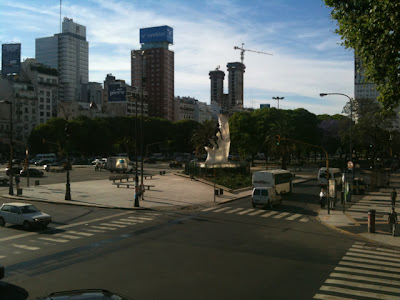 I returned to the city center and checked into a hostel. I would wait at the hostel for two days before I received confirmation that my motorcycle would be flying out on Saturday. I booked a flight for myself to leave on Sunday. 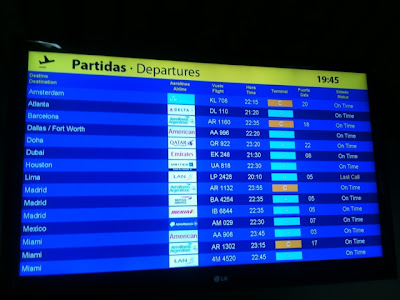 On Sunday, I arrived at the airport and prepared to depart. 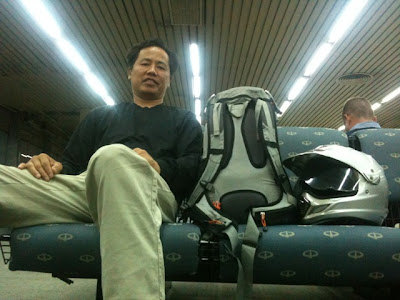 I pulled out my valuables from my saddlebag and stuffed them into my backpack. I checked my saddlebag in as luggage at the baggage check area. I carried my backpack and helmet with me. 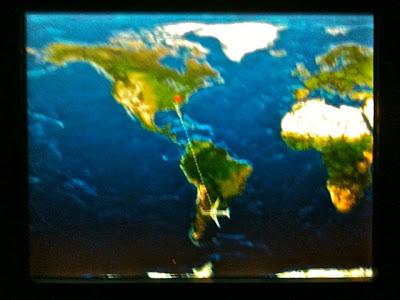 Then I boarded my flight... leaving Buenos Aires... leaving South America... ending the adventure that had began over a year ago.