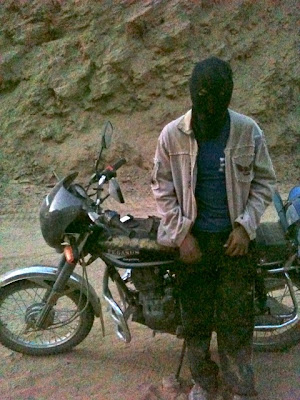 He was riding a 125cc Leopard motorcycle. Like many riders in Bolivia he did not wear a helmet or protective gear, but because it was cold he was wearing a jacket and ski mask. 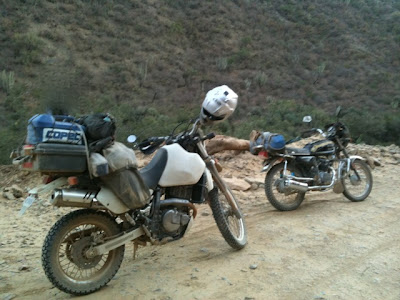 At first I was afraid that he would not be able to keep up with me and my bike, so I let him lead.

Well, just outside of the town the road turned to dirt, then to sand, so we both slowed down. It was tricky riding. I did not have a great deal of experience riding in sand. This sand was a fine and loose powder, more like what we call coliche sand in Texas. It was loose and a challenge to ride over.

My riding partner feel over two or three times. Luckily, I was able to keep Emi upright.

After about 4 hours of riding in the sand, we came across this... 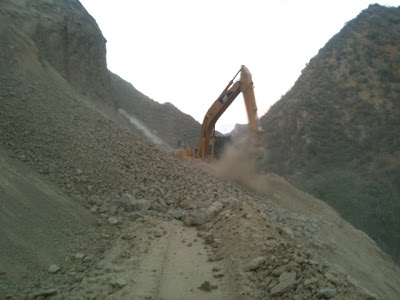 The road was blocked by a landslide. There was a construction crane clearing the path, but it looked like it might take a while. 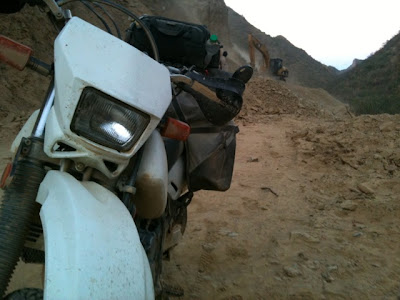 And so we sat there and waited. We waited for about 3 hours. At about 8pm the path was clear.

There was one other motorcyclist that had been delayed alongside of us. It was a man riding with his wife who was carrying a baby in her arms. The sun had set and it was night. So we all set off into the dark along the dirt road. I was amazed at how fast the man/wife/baby bike was moving. We were not going to make it to Santa Cruz in the dark. We pulled into a town called Saipina. I found the one hotel located in the town and settled in for the layover,

The next morning, I arose early and rode the remaining five hours into Santa Cruz.

It was quite the experience. I think that longest stretch of sand that I had ridden over prior to this experience was all of 100 yards. In total, this was probably 7-8 hours of riding over sand. I was glad to see asphalt.